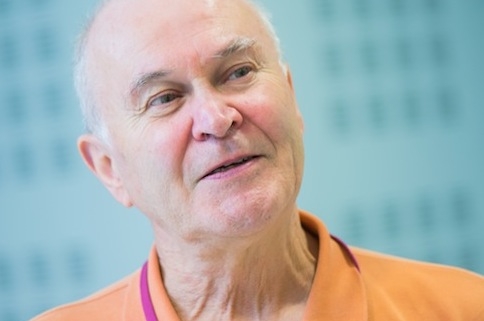 What is the impact of space flight on bacterial virulence and antibiotic susceptibility? With this subject is dealing Peter Taylor, Professor of Microbiology, University College London. Carola Timmel met him on the occasion of his visit to Vienna.

Professor Taylor, in a recently published study (July/2015) you reviewed The impact of space flight on bacterial virulence and antibiotic susceptibility and concluded that the risk of serious infection for spaceflight crew members will grow as we journey beyond LEO (low earth orbit) into deep space. When reading your study, I asked myself if investigation of infections acquired during such extended space flight could shed light on the immense problems we face on Earth with regard to antimicrobial resistance (AMR).

Yes, indeed – investigations in space or under simulated microgravity in terrestrial laboratories can help us understand better the mechanisms of bacterial resistance to antibiotics. The first person who experimented in this field was the French astronaut Jean-Loup Chrétien. He cultured a Staphylococcus aureus from his nose and an Escherichia coli from his bowels, took them with him on a trip to the Salyut 7 Earth orbiter; when he tested them against a set of commonly used antibiotics he noted that both bacteria became more resistant, in reversible fashion, to these drugs. Understanding the basis of this conversion to antibiotic resistance could help us identify bacterial proteins that we can think about targeting with new chemicals. This was in the 1980s. Since then there were some important investigations in space (among others Nickerson et al. USA, 1990s) and also under simulated microgravityon Earth) that support the assumption that bacteria become more dangerous in space.

How can these findings help us to combat antimicrobial resistance?

As I have said, these changes in antibiotic susceptibility are reversible. I strongly believe that changing the behaviour of pathogenis (dangerous) bacteria rather than killing them would be good alternative approach to the treatment of many life-threatening infections and this strategy could reduce or even prevent the emergence of antibiotic resistance as they could restore the balance between host and microbe in a way that avoids natural selection on Dawrinist principles.

What does “balance” in this respect exactly mean? Can you give an example?

Yes, let´s take for example MRSA. These staphylococci are usualy resistant to a wide of antibiotics but particularly the penicillins and cephalosporins (the “beta-lactams”) that are the mainstay of therapy of infections caused by this pathogen. But the emergence of resistance to these wonderful agents has rendered them less effective over time. We are developing new drug-like molecules based on chemicals found in green tea (the catechin gallates); these natural products are able to completely abolish resistance to beta-lactams and could give us the opportunity to restore the effectiveness of these attractive antibiotics if our new compounds could be used in tandem with the conventional drugs.

So modifying, instead of killing, bacteria could be a new way to attack the problem of AMR?

Absolutely. We have shown in animal models of serious infection that modifying the bacteria at the site of infection without killing them is a powerful way of curing infection. We have tested this principle in meningitis and sepsis in the newborn and in experimental inhalation anthrax, both frequently lethal infections.

How long will it last, until an effective medicine will be developed?

This is a very difficult question to answer. Funding is difficult in this area but is getting slowly better. Our current arsenal of antibiotics has been provided by the pharmaceutical industry but for a variety of reasons the development of new antibiotics is not attractive to them and their investors. There is a growing realization that new agents must be developed along new principles and academics have an important role to play in this regard. Space flight research has a long and proud history of spinning off new technologies (not only the non-stick frying pan!) and the investigation of bacterial behaviour during spaceflight may help us in this regard. In this respect the current American president has acted as a brake on space research but we should look beyond to the upcoming US election for a change in fortune.

Refugees: There is a lot of unjustified fear related to importation of communicable...