Du bist hier: Startseite1 / Infections2 / Ebola outbreak – where are we one year later? 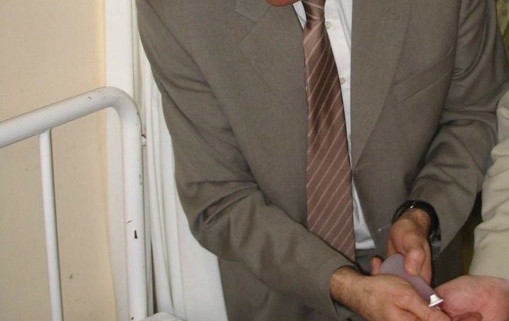 The Ebola outbreak in Guinea, Liberia and Sierra Leone, is a year old this days. According to the official counts there are infected 25.000 people and 10.000 are killed. What were the failures and what are the challenges in dealing with this disease? With Prof. Didier Pittet from the WHO Collaborating Centre on Patient Safety spoke Carola Timmel.

Prof. Pittet, the Ebola outbreak last year was the first Ebola outbreak to reach epidemic proportions. Apart from the failures in course of the incident in 2014 – what has been neglected to do in the last decades?

We know this virus for almost 40 years. Despite of the fact, that we have vaccines that seem to be useful and efficient in monkeys to prevent Ebola – they were not further developed for humans, because there was no market and there was no money to develop the vaccines. Actually these vaccines are currently under rapid testing by different institutions around the world. If we could have had this vaccines earlier we could have prevented this to happen in West Africa.

What can be done, to ameliorate the situation?

There are many things that can be done. And actually, if you look at the situation carefully it was a large epidemic and now it is getting a little bit better. Important is that people become confident again in the healthcare system and come back to the hospitals to get cured and treated. And you need to communicate with community leaders in the countries, in order to increase the level of hygiene and the level of behaviour toward the taking care of the Ebola patients, of the population, of the families and so on.

What did we learn from this outbreak?

What we learned from this outbreak is that of course – if you have a healthcare system that is really at the limit, Ebola such as other diseases can really make it crash. At the beginning it was a sort of emergency – a sanitary emergency – and now it is a humanitarian emergency. For many reasons: because we had to implement quarantines, we had to close markets, exchanges, we closed travel, we closed trades, we asked children not to go to school. And so you completely block and paralyse the system. And this is what happend. The major mistake that was made probably in the handling of the case of Ebola is the lack of involvement of community leaders. So this we learned from this outbreak. And let’s hope that we don’t do this mistake again next time.