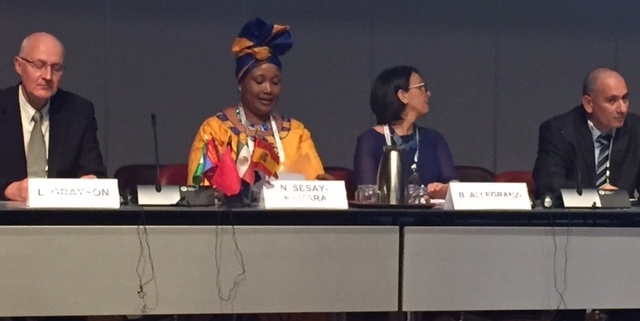 „The need to share knowledge and experience remains unchanged“ said ICPIC chairman Prof. Didier Pittet at the third ICPIC conference in Geneva on June 16-19. In fact, there were a lot of possibilities to share knowledge – almost 1000 attendees and over 100 speakers from 74 countries discussed all possible aspects on Prevention and Infection control in hospitals. Special focus this year was put on the Ebola epidemic, which has been by far the most severe outbreak of Ebola ever with ten times more deaths than all Ebola outbreaks before. For an entire day about 20 speakers and testimonials gave insight on the dramatic development in Africa.

“At the official opening of the conference, two moments deeply touched the hearts of all listeners”, says Dr. Bernhard Küenburg, President of the Semmelweis Foundation Austria. When Felix Baez, a Doctor from Cuba who was on an Ebola mission in Sierra Leone told his story how he was infected, transferred to Geneva hospital, survived Ebola and went back to Sierra Leone to accomplish his mission, most people paid him a standing ovation. A touching moment was also, when Madame Nanah Sesay Kamara, representative of the Minsitry of health of Sierra Leone in her colorful, native dress lit a candle for all those doctors who have died in their attempt to fight Ebola.  During this minute of silence tears were in the eyes of everybody.
After this touching conference start, officials of the WHO explained the enormous learning effect on prevention and infection control through this Ebola outbreak.
A second important topic at ICPIC was AMR (Anti Microbial Resistance) – a topic that was also discussed at the G7 meeting recently in Germany (June, 8).

„We study the reservoir of antibiotic resistance genes that is harbored...