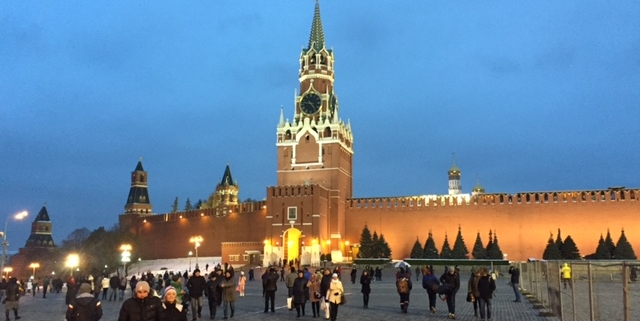 Congresses are connecting – this demonstrates the example of two important institutions and their initiatives. The participation of Prof. Vasili Akimkim at the first Semmelweis CEE conference on hospital hygiene and patient safety last year in Vienna was followed by a return invitation of the president of the Semmelweis Foundation, Dr. Bernhard Küeenburg. A report from an exciting event in Moscow.

If an example of the famous Viennese Sacher cake embark on a journey, there is an important reason for this. The difficult-to-transport delicacy was handed over by Dr. Bernhard Küeenburg to Prof. Vasili Akimkin (vice president Russian Institute of Desinfectology) on the occasion of his nomination to a member of the Russian academy of sciences. But the president of the Semmelweis Foundation not only had this in his luggage. On an exclusive event (Russian Institute of Desinfectology) that took place in the run-up of the Russian National Congress for Infection Control with international participation, Dr. Küeenburg had the opportunity to speak about the important issue of multidisciplinary in infection prevention.

“I am pleased to report about this important topic in the certainly most important CEE country”, said Küeenburg, who took the audience on a stroll through the world of infection prevention, beginning at Dr. Ignaz Semmelweis, the father of infection control, and spanning the range to the problems we are confronting nowadays: “We live 155 years after the publication of Semmelweis, doctors swear the Hippocratic vow/resp. the Geneva Declaration of the World Doctors Association (The Health of my patient will be my first consideration), and yet – 147.000 people die every year in Europe as a result of healthcare associated infections (HAI). How can that be – what went wrong?”

“The fact, that there are still deep rifts between actual and desired state, was leading the Semmelweis Foundation to get in touch with Prof. Didier Pittet from the WHO, wo actively supports our initiative and wo will be one of the key note speakers at our 2nd Conference on March 7-9 2017 in Budapest: Pittet adapted Semmelweis to the 21st century”, says Küeenburg, who was endowed as well: At the end of the performance he was honoured to an Honorary member of the All Russian Scientific Practical Society of Epidemiologists, Microbiologists and Parasitologists.
A quite good exchange ….

Air samples from Beijing contain DNA that make bacteria resistant to the most...

APUA – a pioneer in the field of AMR
Nach oben scrollen